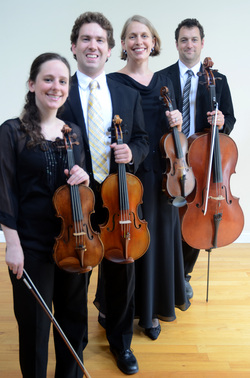 The Grant Street String Quartet is an engaging and refined ensemble that has delivered exquisite performances in and around Chicago since its formation in 2010.  Recent appearances include performances at Fourth Presbyterian Church of Chicago, the Union League of Chicago, Lewis University's Arts and Ideas Series, the Open Door Theater, and the Ukrainian Museum of Modern Art, and collaborations with the MAVerick Ensemble, the Musicians Club of Women, the Church of Beethoven, the Children's Museum of DuPage and the Downers Grove Music Club.

In addition to performing classical repertoire, the quartet advocates for new music by local and international composers, and has recently collaborated with Access Contemporary Music in recording new compositions by its member composers. Grant Street is also committed to bringing music to the next generation through educational outreach concerts and masterclasses at Chicago area schools. In 2016, the quartet was in residence at Naperville North High School and Downers Grove North and South High Schools where it gave performances and seminars on rehearsing and performing chamber music, and coached student chamber groups to prepare them for their Solo and Ensemble Day performances.

Grant Street Quartet has released a recording of music by Beethoven, Bartok and Shostakovich, and another entitled "Breath" of music by Chicago area composer Timothy Corpus.
Proudly powered by Weebly